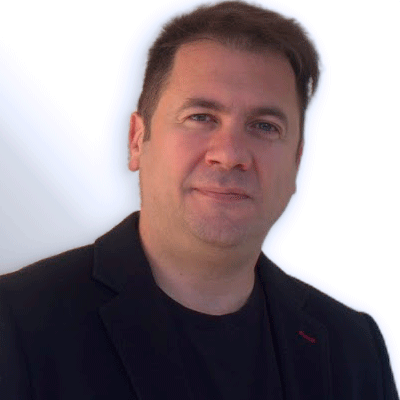 Technologies shape both form and substance of the way we communicate and indentify with everyone around us.

Claudio is a Computer Engineer from the University of Granada specializing in audiovisual technologies and new media. Founder of two technology companies, he has always been interested in the creative side of the computer-generated imaging sector.

He started his career as a Webmaster at IBM UK for resellers and server partners. He soon jumped into the audiovisual sector on television, being a generalist in 3D design for virtual sets and image post-production. In early 2000, he was between London and Malaga as co-founder of Civista, a start-up for transcribing web content to the first mobile terminals on the market. Later, he specialized in Digital Video Editing and Composition and worked for advertising agencies and events in Madrid.

His professional development took him to the world of 3D animation cinema, where he was supervisor of the Editorial Department of Kandor Graphics with Antonio Banderas, where he made 2 feature films and a short film, winning 2 Goyas for “The missing Lynx” and “The lady and the reaper “, this latest work being a candidate for the Oscars 2010 for Best Animated Short Film. In 2013 “Justin and the Knights of Valor” participated, produced between Los Angeles, London and Granada, with a record budget in the world of Spanish animation and casting.

As founder and director of production at Greyman Studios he carried out various projects in new media for Marketing and advertising, experimenting with Virtual Reality, Augmented Reality and Videogames. He directed the Alhambra Quest transmedia project together with the University of Granada, combining animation web series, geolocation applications and web content.

Since 2017, he has been a consultant in audiovisual projects in new technologies and continues to collaborate in international animation projects.

Any cookies that may not be particularly necessary for the website to function and is used specifically to collect user personal data via analytics, ads, other embedded contents are termed as non-necessary cookies. It is mandatory to procure user consent prior to running these cookies on your website.